Discover the canals
of Amsterdam

Scroll down for more information

Amsterdam, the capital of the Netherlands, is one of the world’s finest and most interesting cities. It derives its specific character from numerous canals and historical monuments. Most of the 7,000 monuments date from the ‘Golden Age’ in the 17th century, when trade brought great affluence to the city. Amsterdam is often referred to as one of the most colourful cities in the world.

Amsterdam is the economic capital of The Netherlands, once a great colonial and trading world power, and hence a historical, cultural and architectural wonderful city. One of its main attractions is its canal system: in fact over 50 miles of mostly man-made waterways run in concentric circles around the heart of Amsterdam. The canals (“grachten”) are bordered by hundreds of magnificent tall and narrow houses from the city‘s power heyday in the 17th century. With their many different shapes of gables and painted decorations they look like gingerbread houses dusted with icing.

When strolling along the canals accompanied by one of our tourguides, you can discover some of the hundreds of beautiful bridges, narrow streets brimming with activity and vibrant flower market stalls. By daytime the canals are already very charming, by night they become even more enchanting because most city sights are illuminated. 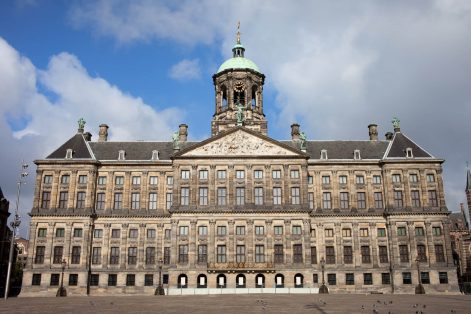